Legendary UCLA basketball player Ed O’Bannon is a prime contender for a future Corporate Speaker of the Year award.

This amazing Bruin “MVP of the Year” continues to score new victories in his crusade for justice against the NCAA on behalf of other players, as a celebrated speaker, and in his challenging role as a top business executive.

As a speaker, O’Bannon shares his experiences, including exciting powerhouse games played with the greatest names in U.S. and European sports. He shares tips on sustaining one’s loyalty and drive for success in the fevered and competitive corporate jungle.

A fascinating article in Sports Illustrated magazine shared the triumphant comeback that O’Bannon is famous for. Following a brutal basketball knee injury, he refused to accept a medical diagnosis stating he would never walk again, much less compete on the court. Instead, he opted for a skin graft and non-stop therapy. O’Bannon’s playing was key to UCLA’s 1995 NCAA Basketball Championship win. He was awarded Most Outstanding Player of the NCAA tournament.

O’Bannon is known for his relentless drive for justice against all odds — a drive that parallels his spectacular basketball career.

Following his inspiring comeback, O’Bannon led a multi-year battle for individual amateur athletes to retain legal rights to their name and images — a right that they did not have in the past. He stated “If somebody took your face and made you the star of a video game, you’d expect to be compensated, right? In no other walk of life can your identity be stolen like that.”

O’Bannon’s indefatigable spirit persevered and a landmark court decision ruled in favor of players in the battle against the powerful NCAA. The court’s decision secured hundreds of thousands of dollars compensation due to Division I football and men’s basketball players for use of their implied endorsements, plus actual costs, to be paid to the players in college scholarships.

“In championing the rights of amateur athletes to control and profit from their names and images, former UCLA basketball star Ed O’Bannon has become the face of the most important legal case in the history of collegiate sports.” — Sports Illustrated

His incomparable drive to win a team victory translates into a motivational message thrilling audiences nationwide, wherever he speaks.

For a most memorable and remarkable adventure in speaker presentations, Ed O’Bannon pulls out all the stops. Score a championship for your team by contacting us today!

Ed O’Bannon grew up in Los Angeles, California, graduating from Artesia High School in 1990. He was a high school All-American in basketball, recruited by every major college in the country before selecting UCLA.

O’Bannon entered UCLA with the highest of expectations before a knee injury put him out for the year and jeopardized his career. Facing months of rehab with the possibility of never playing again, Ed persevered. His injury and fight to return to basketball were the building blocks of his sports career, eventually helping him build the courage to take on the NCAA.

His time at UCLA culminated in the Bruins being National Champions and his being named the MVP of the Final Four. He won numerous honors including the 1995 “John R. Wooden Award,” given annually to the best player in college basketball.

O’Bannon was drafted by the New Jersey Nets in the first round. However, his NBA career was cut short because his knee had not completely recovered from his previous injury. After the NBA, O’Bannon played seven seasons in Europe. He retired from basketball in 2004.

A great basketball player, teammate and leader, O’Bannon is most commended for his courage in taking on the NCAA to improve the lives of amateur athletes.

O’Bannon married his college sweetheart, Rosa, and together they have three children. Following his 2004 retirement from basketball, he entered the car business as a salesman, and diligently worked his way up.

Today, Ed O’Bannon enjoys a busy speaking schedule along with his work as an assistant coach for a high school. He challenges himself to reach new pinnacles of success as Marketing Director for one of the most dynamic and successful auto dealerships in the nation. 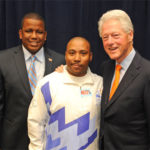 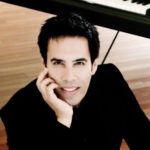